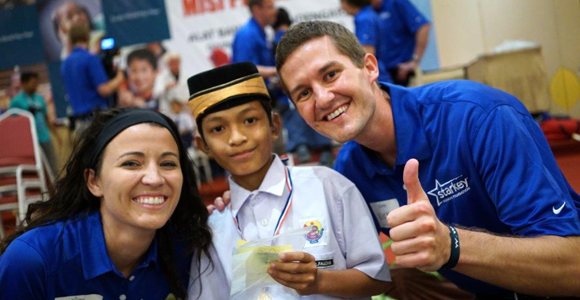 Hearing aids really can change lives. And this March, Starkey Hearing Technologies employees and married couple Nick and Mollie Fabel got to experience that change first hand as they took part in a Starkey Hearing Foundation mission to Malaysia. Nick has been with Starkey two years and is the Manager of Audiology Recruiting and My Talent Solutions. As a project manager in Corporate Marketing, Mollie has worked at Starkey for almost four years.

We caught up with Nick and Mollie to hear all about their experience working with the Foundation in Malaysia.

Tell us a bit about your experience in Malaysia.

We were part of the pilot group for the Phase 3: AfterCare training that Tani Austin (Foundation co-founder) effectively took us through the day before the mission work started. We got to work with our partners in Malaysia, Best Hearing, as well as social workers and audiology students who were going to help with the hearing mission and assist with AfterCare once the mission was over.

There is only one way to describe the hearing mission: life changing. You see the videos and hear the stories, but until you actually see the impact that the hearing aids have on an individual firsthand, there’s nothing like it. Along with giving these people their hearing back, we are showing them that we care. Starkey Hearing Foundation does so much more than just fit people with hearing aids. We go into these countries and show support, and that we care for them!

There are quite a few couples here at Starkey, so what was it like to go on this mission together?

There was nothing better than experiencing this together. This has been an absolute dream come true for each of us. We can both speak to the fact that we have never been more proud of the other for the work we did during the hearing mission, and the lives that were changed because of it.

Tell us about one patient you helped or one person that you worked with that made an impression or impact on you.
Nick: I had three brothers come up to my fitting station on the final day. The youngest brother had a severe hearing loss and hasn’t been able to communicate with his siblings since he was born. After fitting this boy with hearing aids, he was finally able to interact with his two older brothers. Each of their eyes lit up, and the two older brothers were so excited to be able to communicate with their youngest brother. This made such an impact on me because I grew up with two brothers, and I can’t imagine not being able to hear their voices or interact with them. My brothers and I needed to be there for each other during good times and bad, and the ability to communicate is such an important factor to that being possible.

Mollie: I had a man who came to me that seemed nervous and concerned. He did not speak but signed, so I asked an interpreter to help. What we realized was the earmolds were hurting him because they didn’t quite fit right. We fit him with a different pair of earmolds and once we turned on the hearing aids he was delighted. By the end of the fitting he was all smiles and full of gratitude. It made me so appreciative for how the Starkey Hearing Foundation team works together to make every person feel special and worthwhile.

What was your favorite part of the trip?
It is extremely hard to pick our favorite part of the trip. We had the opportunity to experience things we never thought we would. The fitting days were extremely powerful and changed our lives forever. To say we had a part to play in changing the lives of many is something that will stick with us forever. To be able to see firsthand what Starkey Hearing Foundation does each and every day was mind-blowing. We are so blessed to say we had the opportunity to work with such an amazing team.

Do you feel that the mission changed your view of the world in any way? If so, how?
It helped us see the positive change that is going on all around us. All you have to do is flip on the TV, or listen to the radio and hear about all the negative things that are going on around the world. There are good people in this world wanting to make a difference in a positive way. Nothing speaks to that better than the work of Bill and Tani Austin and the Foundation team.

How were hearing loss and hearing aids viewed in Malaysia?
It was easy to see the disconnect between the people experiencing hearing loss and the people who weren’t. Hearing loss seemed to deter individuals from opportunities in Malaysia because of their “disability,” rather than having people look at them for their ability. As far as the hearing aids go, we felt like everyone that we fit wore those new aids loud and proud! It certainly appeared as though it gave them their life back.

What’s next for you?
We both would love the opportunity to go on another hearing mission trip. We both feel like we have so much to give and want to help as many people as we can. Mission work and giving back is sort of addicting!